Your Brain on Grain (How Gluten Impairs Brain Functioning 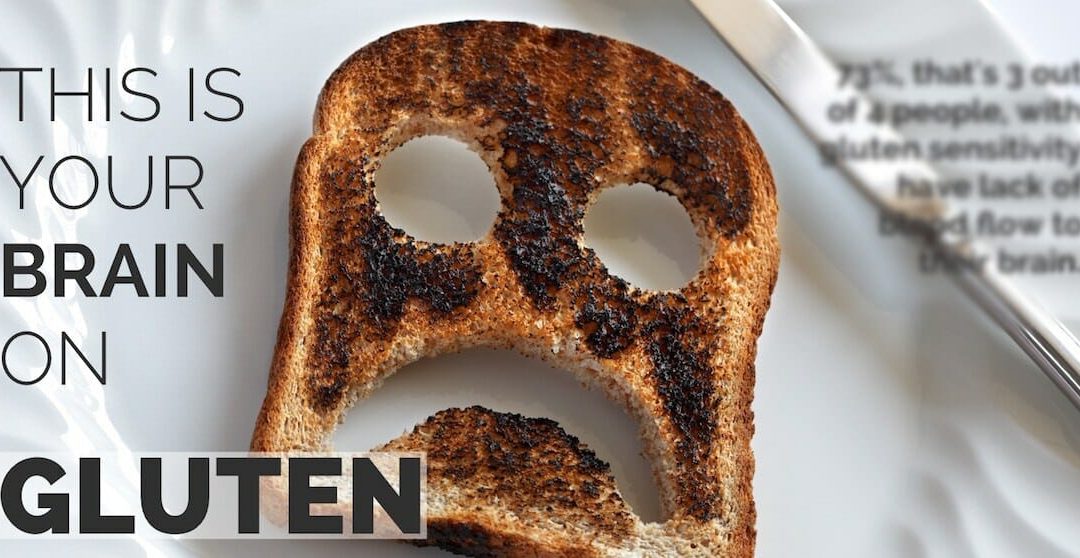 Despite a mountain of evidence demonstrating the negative health effects of gluten, the debate continues.

For some time, “pro-gluten” health researchers would only agree that gluten impairs gut functioning in a small percentage of people. But a number of recent studies show an undeniable connection between gut health and brain health (1).

Given this “gut-brain connection,” even the most cautious researchers are singing a different tune: gluten impairs cognitive functioning.

Connections are even being drawn between the consumption of gluten and the onset of Alzheimer’s disease. At the very least, it’s clear that minimizing or eliminating your intake of gluten reduces the risk of cognitive decline.

But how and why is gluten so destructive to the brain?

Gluten inhibits immune functioning, accelerates the propagation of diseases, interrupts metabolism, and hijacks your bio-chemical relationship with food—all of which leads to major brain strain.

Let’s trace the process by which gluten wreaks all this havoc.

It all starts in the gut…

New research demonstrates that the consumption of gluten can cause an immune response in anyone—not just in those with Celiac’s disease and gluten intolerance (2).

Here’s how it works: your intestinal tract has a thin lining called the epithelium, which prevents undigested material from slipping into the bloodstream. Frequent consumption of gluten triggers a process known as zonulin signaling, which causes the cells in the epithemlium to separate.

When this separation occurs, bacteria and toxins end up in the bloodstream, and thus trigger an immune response.

An immune response is essentially inflammation—a natural, healthy bodily function when triggered infrequently. When the immune system is constantly on alert, though, its ability to protect the body is suppressed, and a state of systemic inflammation sets in.

For this reason, inflammation has been called the root of all degenerative disease (wherein the body gradually loses its ability to ward off increasingly adverse dysfunction).

…and the brain suffers too

When this “leaky gut” condition begins to cause escalating inflammation throughout the body, the brain is affected, as well.

Systemic inflammation leads to decreased bloodflow in the brain, which leads to the “brain fog” and diminished cognitive performance that’s often associated with gluten.

A recent study showed that a constituent of gluten—called wheat germ agglutinin—is actually an acute neurotoxin (3). This toxin is able to cross the blood-brain barrier completely intact and bind to neurons for extended periods of time.

Wheat germ agglutinin is also pro-inflammatory, and thus contributes even further to the systemic inflammation that we discussed above.

Lastly, the vast majority of commercially produced wheat is overrun with mycotoxins, which place huge amounts of stress on the brain (they also ravage the immune system, cause cancer, and disrupt hormone function). You can read more about wheat mycotoxins here.

To top things off, another study demonstrates that gluten breakdown products work on opioid receptors in the brain (4).

This explains why gluten consumption is such a hard habit to kick—it affects the brain in a way that is similar to some of the world’s most addictive substances!

Perhaps the most alarming implication of this finding is that the damaging effects of gluten can be perpetuated by psychological and physiological dependence.

It’s generally a good idea to avoid anything that hijacks our body’s ability to reject it as unhealthful, right? You’d probably agree that other harmful, addictive substances should be banished from the body. It’s about time we started including gluten in that category.

So are you ready to go gluten-free?

Hopefully, the information presented above has at least led to some eyebrow-raising. Remember, though: there’s no substitute for personal experience.

Try cutting gluten out of your diet, and see how you feel. Experts say that doing so for at least six weeks will yield the most dramatic results, but you’ll feel the difference even by trying a shorter gluten fast.

Studies and statistics can only point us in the right direction. At the end of the day, it’s up to you to apply these principles, in order to determine which of them work best for you.