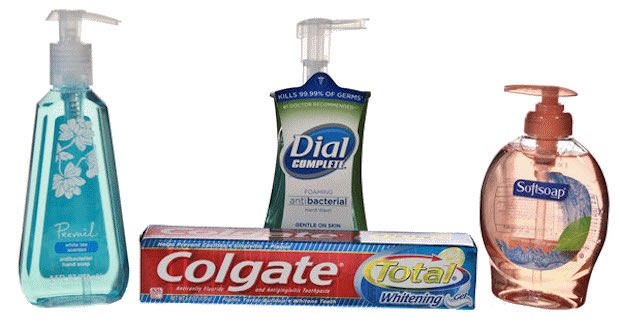 A chemical called triclosan poses a health risk, as it is a toxic compound which can promote cancer. The most shocking thing is that triclosan is commonly found in everyday consumer goods such as antibacterial soaps, deodorants, body washes, creams, lotions, cosmetics, cleaning supplies, detergents, dishwashing liquids, and yes, mouthwash and toothpaste.

Toothpaste is supposed to help clean your teeth, but what it actually does just might horrify you. When tap water meets toothpaste, the triclosan reacts freely with the chlorine in the tap water to become chloroform (a chlorinated aromatic) and is similar to the dioxins found in the compound Agent Orange. It’s a chemical reaction occurring right in your mouth while you brush your teeth. And don’t think you are safe once you rinse it all out of your mouth: research shows that it can remain in your mouth after brushing for up to 12 hours, and can be easily absorbed into the tongue and through mucus into the body. (Children are at the greatest risk, as they tend to swallow their toothpaste more while brushing their teeth.)

According to the National Coalition Against the Misuse of Pesticides (NCAMP), “Manufacturers of a number of triclosan-containing toothpaste and soap products claim that the active ingredient continues to work for as long as 12 hours after use. Thus, consumers are exposed to triclosan for much longer than the 20 seconds it takes to wash their hands or brush their teeth.”

“These products produce low levels of chloroform, but that adds up over time. The amount of gas formed is very low but I think the key thing is that we just don’t know what the effects are. However, manufacturers do have to list triclosan on their ingredients, so if consumers are worried the best advice is to avoid products with the chemical,” said Giles Watson, a toxicology expert.

The U.S. Food and Drug Administration and the European Union currently regulate triclosan, and the Environmental Protection Agency classifies this substance as a probable human carcinogen.

Toothpaste manufacturers claim that triclosan is used because it helps to reduce plaque and kill bacteria, but it actually aids in gum damage and can cause mouth ulcers, say some health experts. These companies like the chemical because it allows them to state the product is a “99.9% bacteria killer” and make claims about the product being a “medicated formula.”

According to the chemical creator’s website, Ciba Specialty Chemicals “invented triclosan more than 35 years ago and in this long time of application without any adverse effects it has proven itself as the ‘aspirin’ of the antibacterial actives — helpful without side effects.

“The popularity of triclosan is a reflection of its unique combination of efficacy against almost all types of bacteria and safety to man and nature which with the currently known substances used cannot be surmounted.”

The toothpaste manufacturers haven’t done any substantial studies that reach a decision on whether to take triclosan out of their products. They continue to say that it is safe and only harmful if ingested. Even then, they say it only affects the nervous system (as if that’s something very minor to have harmed).

The chemical company states: “Ciba supports the use of triclosan only if there is a benefit to human beings.”

So, what if it is shown to offer no benefit to humans? Will they pull it off the shelves now that evidence points to its danger from exposure? (Some toothpaste manufacturers, like Tom’s of Maine, specifically state that they do not contain triclosan.)

Triclosan is also used in plastics and fabrics, where it goes under the trade names Microban and Biofresh respectively. It is infused into or used as an additive in a number of consumer products like toys, bedding, trash bags, socks, kitchen utensils, textiles and plastics.

“Over 95% of the uses of triclosan are in consumer products that are disposed of in residential drains. In a U.S. Geological Survey study of 95 different organic wastewater contaminants in U.S. streams, triclosan was one of the most frequently detected compounds, and in some of the highest concentrations,” according to the NCAMP.

According to Worldwatch Institute: “In the United States, 75% of liquid soaps and nearly 30% of bar soaps now contain triclosan and other germ-fighting compounds whose prevalence can foster the growth of bacterial resistance.”

The widespread use of triclosan is now known to create the risk of breeding new, resistant superbugs that may be far more dangerous to human health than the original germs killed by triclosan in the first place. My advice to consumers is to avoid all products containing triclosan.

• Avoid all products that make “antibacterial” claims (unless they are using herbs to accomplish it).

• Read the ingredients labels of all consumer products in order to make sure they do not contain triclosan.