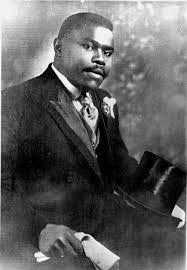 Marcus Mosiah Garvey (1887-1940), an African man from the West Indies, was one of the first to articulate the concept of African nationalism – of black people returning to Africa, the continent of their forefathers, to build a great nation of their own. Garvey spent his entire life in the service of his people–African people. Dubbed the BLACK MOSES.

Born in St. Ann’s Bay, Jamaica, on August 17, 1887. Marcus moved to Kingston at the age of 14, found work in a print shop, and became acquainted with the poor living conditions of the laboring class. Garvey wasted no time involving himself in social reform, participating in the first Printers’ Union strike in Jamaica in 1907, leading to the set up the newspaper The Watchman. He traveled throughout Central America, Panama Canal Zone, Costa Rica, Nicaragua, Ecuador, Colombia, Honduras and Venezuela. Garvey was overwhelmed by the evidence that black people everywhere were victims of discrimination. Everywhere, blacks were experiencing great hardships. In 1912 he visited London, England in search of additional financial backing where he worked with the Sudanese-Egyptian nationalist Duse Mohamed Ali. He departed England on 14 June 1914 aboard the S.S. Trent, reaching Jamaica on 15 July 1914. He founded the Universal Negro Improvement Association (UNIA) with the motto “One God, One Aim, One Destiny” in August 1914 as a means of uniting all of Africa and its Diaspora into “one grand racial hierarchy”. Amy Ashwood, who would later be Garvey’s first wife assisted in this bold endeavor. One of the main objectives of the UNIA was “to unite all people of African ancestry of the world to one great body to establish a country and absolute government of their own”

In 1916 Garvey was invited by one of his most inspiring authors Booker T. Washington to come to the United States in the hopes of establishing an industrial training school, but arrived just after Washington died. Garvey arrived in the U.S. on 23 March 1916 to give a lecture tour and to raise funds to establish a school in Jamaica modeled after Washington’s Tuskegee Institute. After moving to New York, he found work as a printer by day. At night he would speak on street corners, much like he did in London’s Hyde Park. On 9 May 1916, he held his first public lecture in New York City at St Mark’s Church in-the-Bowery and undertook a 38-state speaking tour. Attracting popular support, thousands enrolled in the UNIA. He began publishing the newspaper The Negro World. His efforts were successful, and soon, the association boasted over 1,100 branches in more than 40 countries, some of which existed in places such as Panama, Costa Rica, Ecuador, Venezuela, Ghana, Sierra Leone, Liberia, Namibia and South Africa. The UNIA claimed four million members by 1920.

Garvey was beginning to build significant attention; one person who noticed was Edwin P. Kilroe, Assistant District Attorney of the County of New York. Kilroe investigated into the activities of the UNIA, without finding any evidence of wrongdoing or mismanagement. Garvey wrote an editorial on Kilroe’s activities for the Negro World. Garvey was arrested and indicted for criminal libel in relation to the article, but charges were dismissed after Garvey published a retraction. While in his Harlem office at 56 West 156th Street on 14 October 1919, Garvey received a visit from George Tyler, who told him that Kilroe “had sent him” to get Garvey. Tyler then pulled a .38-caliber revolver and fired four shots, wounding Garvey in the right leg and scalp. Garvey was taken to the hospital and Tyler arrested. Tyler had committed suicide by leaping from the third tier of the Harlem jail.

Within a few years Garvey had become the best-known and most dynamic African leader in the Western Hemisphere and perhaps the entire world. Garvey launched some ambitious business ventures such as The Negro Factories Corporation, a restaurant, a millinery, a publishing house, and a chain of cooperative grocery stores. But most notably, Black Star Shipping Line. With this maritime fleet that he hoped it would give blacks political power and bring them to the forefront of worldwide trade. Selling shares of five-dollar stock through the mail enabled him to acquire enough capital to purchase three ships for the Black Star Shipping Line. The shipping company contributed to Garvey’s growing prominence as an international champion of Pan-Africanism. Consequently, he introduced a plan to transfer his organization’s headquarters to Monrovia, Liberia.

In the years following the organization’s first convention, the UNIA began to decline in popularity. “Garvey must go” Campaigns were formed by his enemies, some of which were members of his own struggle, notably W.E.B. Dubois, one of his main rivals. 1919, J. Edgar Hoover, special assistant to the Attorney General, and head of the General Intelligence Division of The Bureau of Investigation or BOI (after 1935, the Federal Bureau of Investigation), wrote a memorandum to Special Agent Ridgely regarding Marcus Garvey. In the memo, Hoover wrote that:

“Unfortunately, however, he [Garvey] has not as yet violated any federal law whereby he could be proceeded against on the grounds of being an undesirable alien, from the point of view of deportation.”

With the Black Star Line in serious financial difficulties, Garvey promoted two new business organizations – the African Communities League and the Negro Factories Corporation. He also tried to salvage his colonization scheme by sending a delegation to appeal to the League of Nations for transfer to the UNIA of the African colonies taken from Germany during World War I. Financial betrayal by trusted aides and a host of legal entanglements (based on charges that he had used the U.S. mail to defraud prospective investors) eventually led to Garvey’s imprisonment in Atlanta Federal Penitentiary for a five-year term. In 1927 his half-served sentence was commuted, and he was deported to Jamaica by order of President Calvin Coolidge.

Upon his return to Jamaica in 1927 Garvey turned his energies to Jamaican politics, campaigning on a platform of self-government, minimum wage laws, and land and political reform. On the 9th of September 1929, Marcus Garvey formed the People’s Political Party. UNIA’s 1929 convention in Kingston, Jamaica rejuvenated some enthusiasm of its earlier Harlem era. Garvey decided to move the headquarters to Jamaica, This was eventually met with some indifference and with propaganda mounting against him, the organization never again amassed a substantial membership. He was soundly defeated at the polls, mainly, because most of his followers did not have the necessary voting qualifications.

In 1935 Garvey left for England where, in near obscurity, he made the transition to his holy habitation on June 10, 1940, in a cottage in West Kensington reportedly succumbing to a stroke. Garvey has become an international symbol of black freedom. Dr. Martin Luther King, Jr., called him “the first man, on a mass scale to give millions of Negroes a sense of dignity and destiny.” In 1964 the Jamaican government proclaimed Garvey a national hero. His legacy served as an integral force in the “Black is Beautiful” consciousness of the 1960’s. Garvey is also an inspirational figure within the Rastafarian movement, propelled by the notable quote “Look to the East for the crowning of a Black King, he is the Redeemer  for the days of deliverance are near.”  He is revered as the Prophet, the Black Moses leading the African Diaspora out of bondage to the promise land. Malcolm X wrote, “Each time you see another independent nation on the African continent you know Marcus Garvey is alive.”