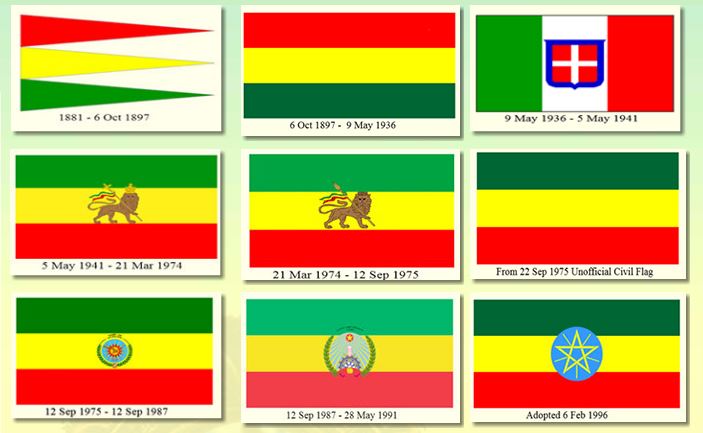 The History of Ethiopia’s National Flag

Ethiopia had never been conquered by a colonial power and defeated the Italians, in their quest of an African colony, on 1 March 1896 at the Battle of Adwa (usually known as Adowa, or sometimes by the Italian name Adua), in Tigray. However on 3 October 1935, the Italians used tanks, planes and chemical weapons, and for five years, from 1936 to 1941, occupied Ethiopia, flying the Italian flag. In 1941 Ethiopian patriot forces with assistance from British drove out the Italians and the National flag was restored. In 1949 Emperor Haile Selassie I adopted an Imperial Standard, featuring the Lion of Judah on the front (obverse) and St. George slaying the dragon on the back (reverse), encircled by the collar of the Order of Solomon’s Seal. 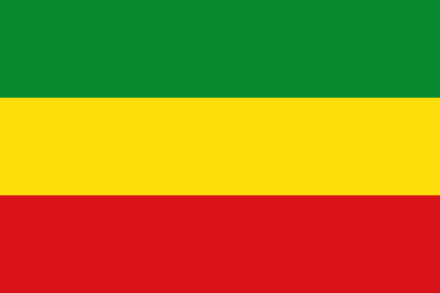 Ethiopia’s State flag was modified after the overthrow of Emperor Haile Selassie I on 12 September 1974 by the military: the crown was removed from the lion’s head and the Cross finial was changed to a spear point. The following year the repressive “Derg” military regime adopted a new flag with an emblem, designed by Taddesse Mesfin. This version lasted until 1987 when, through a referendum, Ethiopia became a “Democratic People’s Republic” with Mengistu Haile Mariam as president. The green-yellow-red flag now carried a new emblem and was used from 1987 until Mengistu’s regime was overthrown in 1991.

A green-yellow-red flag without any emblem had always been used by the people, as it could be cheaply made and would remain current even when regimes changed: this basic pattern could not be changed. It became the country’s only flag after the overthrow of the communist regime until, on 6 February 1996, new symbols were introduced for the Federal Democratic Republic of Ethiopia. The emblem features a blue disk, symbolizing peace, and a pentagram with rays emanating from its inner angles signifying ”the bright prospect in sight for the Nations, Nationalities and Peoples (of Ethiopia) united in their common will”.

Since the reorganization of Ethiopia into nine ethnic regions, each region now has its own flag as well. 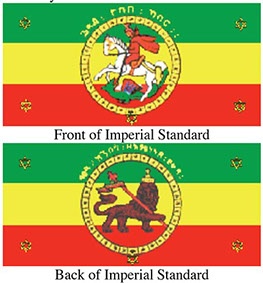 The Imperial Standard is the Ethiopian Flag (horizontal Green, Yellow, and Red stripes) St. George slaying the Dragon on the front of the flag. Surrounded with the chain of the Order of Solomon’s seal, and the Lion of Judah on the back. The Ethiopian Star of Solomon (Star of David with a Cross Centered on it) would appear on each corner of the standard, front and back.

St. George was one of Ethiopia’s Patron Saints, and was associated particularly with the Imperial Family and with the Imperial military forces as well. The Battle of Adwa in 1896 which resulted in a resounding victory of Ethiopia over the colonial forces of Italy took place on the feast day of St. George, and it is this event that inspired both the construction of Addis Ababa’s St. George Cathedral (Kidus Giorgis) and the placement of this Saint on the Imperial Standard, and on the Standard of the Imperial Army. A very large mosaic of St. George was part of the facade of the Parliament building in Addis Ababa, but it was painted over by the Derg regime following the revolution of 1974, and it remains painted over today.