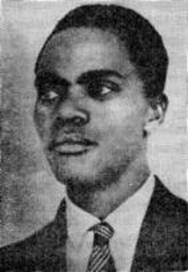 President Groire Kayibanda, head of state, head of the government and commander-in-chief of the national army of the Republic of Rwanda, was born in the town of Kitega in 1924.

After studying the Humanities and Philosophy in Usumbura College, he became a school inspector. The invaluable services which he rendered his countrymen as chief editor of the Kinyamateka newspaper by way of enlightening them on various topics and subjects has left a deep impression on the minds of the people. Mr. Kayibanda was also one of the national leaders who signed the 1957 Bahutu Manifesto, which demanded justice, equality an freedom for the masses.