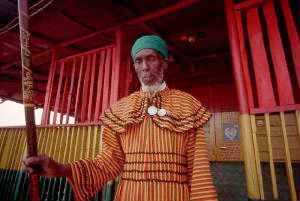 In this article I would like to examine the formative years of the EABIC and its Founder, Leader, Rt. Hon. Prince Emmanuel Charles Edwards.

Among the countless number of immortalized heroes, who have selflessly fought for the upliftment of our race, the Rt. Hon. Prince Emmanuel Charles Edwards’ name will be forever etched into the annuls of history. Founder of the Ethiopia Africa Black International Congress Church of True Divine Salvation, (Bobo) King Emmanuel struggled relentlessly for the rights of African people the world over. Undeniably, it was the Rt. Hon. Prince Emmanuel who coined the slogan, “Freedom, Redemption and International Repatriation,” that the Rastaman and Woman so longed desired, the right to return home. Prince Emmanuel ever since the late 40’s have pursued the Right of Repatriation for the African slave children scattered throughout the west as a result of slavery. Noted for being one of the earliest agitators for Reparations, Prince Emmanuel and his Congress has for decades been on the forefront in the Repatriation struggle.

Little is known about the early of Prince Emmanuel who appeared Treasure’s Beach the in Parish of St. Elizabeth (Jamaica) around 1915.  Brother Eddie as he is also called migrated from St Elizabeth into the capital city Kingston during the early 30’s. At that time the newly formed RasTafari Movement was gaining the attention of many of the inner city youths in the island. With Garvey abroad, the newly found ‘doctrine of RasTafari’ took its rank heralding the banner of race pride for generations to follow. Prince Emmanuel was at one point part of the Howelite ideologies and allegorical.

During the late 30’s he began working at Up Park Camp, which was the headquarters of the British Army in Jamaica performing odd jobs.  After working at Up Park Camp for some period of time the Hon. Prince Emmanuel said He was called upon by his Father Jah RasTafari to redeem his people from out of Egypt/Jamaica and the western world (the house of bondage). One day while painting a building Prince Edwards fell off a ladder, though he was able to walk away uninjured, it was that incident which he says led him to leave Up Park Camp to pursue His Father’s mission. In 1944, he moved to an area called Ackee Walk located in the infamous area then known as Bac-O-Wall, which is one of the major cultivating grounds of the RasTafari Nation.

Following his move to Ackee Walk, in 1948 the Hon. Prince Emmanuel began lobbying the heads of the Jamaican and British governments, for free transportation to repatriate the African slave children of Jamaica and the western world back to Africa. By the 1950’s Brother Eddie was becoming a prominent figure in the RasTafari movement who taught the people of their true heritage and nationality.

Following a decree issued late 1957 by Governor Hugh Foote, which declared that self governance will be given to the people of Jamaica, Prince Emmanuel organized and convened a 21 day seminar on the topic of repatriation. The Convention, was held on March 1st 1958 at, 54b Spanish Town Rd. Kingston Jamaica his former residence. This was historicized as the ‘First Groundation’ of the RasTafari Brethren. Prince Edwards was the chairman and Bongo Watto the ceremonial High Priest of the occasion as 3,000 Rastaman, Woman and Children, who sung and chanted to the Nyabinghi drums. The Convention was highly publicized and people from all over the island came with the hope of embarking for Africa. During this March 1st Convention the Ethiopia Africa National Congress was formed, now known as the Ethiopia Africa Black International Congress. 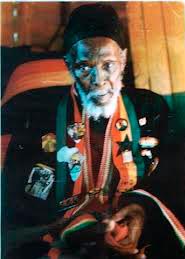 Despite brutal assaults by the Jamaican authorities, was undeterred and continued to agitate for the rights of the people. Most of the Rasses who were a part of the Convention went their separate ways, leaving only a handful of souls remaining faithful members of the Congress. The police who once again attacked Prince Emmanuel who was also unjustly imprisoned raided the same year of the Convention. The case was highly publicized and drew public criticism of the people directed at the actions of the JCF. Some even wrote to the Jamaica gleaner and expressed their disappointment with the Jamaica government.

Eventually Prince Emmanuel and his brethrens were freed and returned to the headquarters at 54b Spanish Town Rd. Western Kingston. Though allowed to return Prince Emmanuel would continue to encounter countless confrontations with the brutal Jamaican police force. The resilience of Prince Emmanuel in the midst of such violent opposition must be noted, his, withstanding the countless attacks, imprisonments and injustices was able to pursue adamantly the basic human rights which are to be guaranteed to all. By the 1960’s Brother Eddie who by this time was becoming to be more widely known as Prince Emmanuel intensified his agitation and began laying the legal framework of the EABIC.

Following the dispersal of the Howellites at Pinnacle in 1954 coupled with the growing number of migrants from the countryside of Jamaica, to the city of Kingston, areas such as Bac-O-Wall quickly became the target of the government namely due to the spread of RasTafari as well as the “Rude Boy culture”. By 1963 the government began the “urban renewal” process which included bulldozing the of homes of 3,000 people in back-o-wall and downtown Kingston. Prince Emmanuel however remained at his former residence at 54b Spanish Town Road up until July 1966 when the entire Bac-O-Wall area was destroyed by the government in order to erect their political stronghold  ‘Tivoli Gardens.’

The bulldozing of the bac-o-wall community displaced thousands of people, many of whom were left homeless, many of whom were forced to sleep in the bordering May Pen Cemetery. Jamaican Sociologists all agree the bulldozing of back-o-wall in 1966 was ‘to counter the positive and radicalizing influence of RasTafari. It could be assumed that the government intent was to frustrate the efforts of the RasTafari Nation in asserting their Basic Human rights. The year 1966 saw the turning point of the RasTafari movement following the visit of Emperor Haile Sellassie 1st to the shores of Jamaica.

HIM visit April 21, 1966 marked the most memorable day in Jamaica and RasTafari history.  Prince Emmanuel was among the 31 leaders who met His Majesty at King’s House and were presented with gold medals.

Documents were said to have been left with the Jamaican government stating that whosoever desires to return to Ethiopia should be handed over unto the Ethiopia Africa National Congress and its Leader the Rt. Hon. Prince Emmanuel Charles Edwards. Hector Wynter editor of the gleaner was to publish such document to make known publically the open invitation of the Emperor, yet said documents were destroyed and such right of the people held down. Jamaica was also invited to have an observer seat in the Organization of African Unity, an offer that Jamaica has never taken up. It could be speculated that the Emperor’s endorsement of the repatriation agenda and his embrace of the RasTafari Movement led to the final bulldozing of bac-o-wall in July 1966.

The bulldozing of Prince Emmanuel’s compound on Spanish Town Road, left the Prince and his apostles homeless not to mention the over 3,000 poor and have nots forced out of a home. He then moved to Harris Street then onto a number of locations as he was constantly bulldozed, fire torched and assaulted by Jamaican police and soldiers. The various locations of Prince Emmanuel campgrounds were in time given biblical names. Ackee Walk became known to be (Nazareth) Harris Street (Galilee) Eight (Capernaum) and Ninth Street (Bethlehem).

Once again left to sleep on the streets Prince Emmanel and the members of his Congress began heading 10 miles east of the bloody city of Kingston. Fulfilling the prophecy that ‘man must go 10 miles east on the mountain top watching babylon running red hot.’ The location of the Congress has since been at 10 Miles Bull Bay St. Andrew Jamaica on Mt. Teman widely known as ‘Bobo Hill.’ Away from the constricted confides of western kingston the Hon. Prince Emmanuel spent the remaining years at Bull Bay rebuilding the networks that were destroyed during the bulldozings at Bac-O-Wall and continued to lobby the heads of government….

The EABIC has long been admired for its principle of self-reliance and has created a broom industry, which is universally recognized as one of the trademarks of the ‘Bobo Shanti’.

In 1967 the Hon. Prince Emmanuel Charles Edwards registered the Ethiopia Africa National Congress with the United Nations and began to direct his petitions through the office of Human Rights.