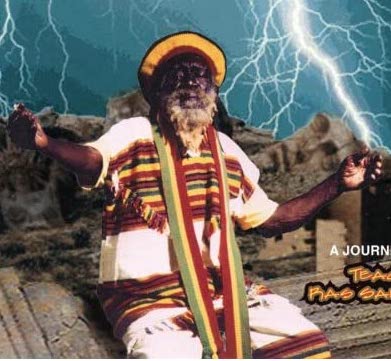 Ras Sam Brown (16 December 1925-August 1998) was a Maverick, a Jamaican RasTafari elder well known in Kingston for his politics after he participated in the elections of 1961 with his Suffering People’s Party.  The first Rasta to ever stand for politics his influence has been greater than this statistic of the fewer than 100 votes he received suggests. His action was that of a maverick especially as at the time there was generalized feeling in the Rastafarian movement that Ras Tafari do not vote. He had a 21-point plan. Some of his ideas were:

• Members of the RasTafari movement are an inseparable part of the black Jamaican people.

• As such we cannot and do not proclaim any higher aims than the legitimate aims and aspiration of the black people of Jamaica.

• The Rastafarian Movement stands for freedom to its fullest sense and for the recovery of dignity, self-respect and sovereignty of the black people of Jamaica.

• The Rastafarian movement, for the furtherance of these ends, must have the backing and support to lead a political party of its own.

• The Rastafarian movement has the backing of no political party. We are the subject of persecution and discrimination.

• The Rastafarian movement therefore has decided to actively join the political struggle and create a political movement with the aim of taking power and implement measures for the upliftment of the poor and the oppressed.

• All men, therefore, are free, irrespective of color to join this political crusade. The only condition is that he must abandon evil.

Leonard E. Barrett in his 1977 book The Rastafarians includes an interview with Brown, whom he describes as “one of the most complex personalities within the Rastafarian movement”. Barrett also provides extracts from Brown`s election campaign literature.[1] Barrett refers to Brown`s political party as the Black Man`s Party rather than The Suffering People`s Party, though he also quotes the party`s position that all were free to join regardless of color. Also included in his book is a photograph captioned “rare photograph of a Rastafarian political party symbol”, depicting a group of Rastafarians (one of whom may be Brown) standing by a placard advertising Brown’s campaign.

In 1996 Brown became a roots reggae singer and poet with an album called History, Past and Present. He transitioned into the realm of ancestor while attending an international trade fair in Barbados in 1998.