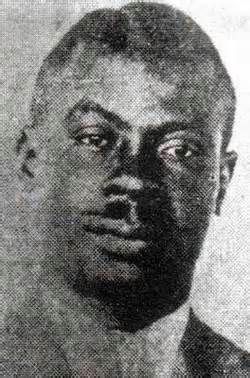 Ras Leonard Percival Howell was born June 16, 1898 in the Parish of Clarendon Jamaica, West Indies. He died on February 25, 1981 in Kingston, Jamaica.  Known as The Gong or G.G. Gangunguru  Maragh (for Gong Guru) he was a Jamaican religious figure. According to his biographer Hélène Lee, Howell was born in an Anglican family. He was one of the first preachers of the Ras Tafari movement (along with Joseph Hibbert, Archibald Dunkley, and Robert Hinds), and is sometimes known as The First Rasta. Born in May Crawle River, Jamaica, Howell left the country as a youth, traveling amongst other places to New York, and returned in 1932. He began preaching in 1933 about what he considered the symbolic portent for the African diaspora—the crowning of Ras Tafari Makonnen as Emperor Haile Sellassie 1st of Ethiopia. His preaching asserted that Emperor Haile Sellassie 1st was the “Messiah returned to earth,” and he published a book called The Promise Key under the Hindu name Maragh which means “teacher of famed wisdom. It contains the foundations for Ras Tafari and used many of the same concepts found in The Royal Parchment Scroll of Black Supremacy (some have accused him of plagiarizing from this book due to the many similarities) and the Holy Piby.  Although this resulted in him being arrested, tried for sedition and imprisoned for two years, the Ras Tafari movement grew.

Over the following years, Howell came into conflict with all the establishment authorities in Jamaica: the planters, the trade unions, established churches, police and colonial authorities, and he was allegedly arrested more than 50 times. He formed a town or commune called Pinnacle in Saint Catherine Parish that became famous as a place for Ras Tafari congregants. Nevertheless, this movement prospered, and today the Ras Tafari Nation exists worldwide. Unlike many within the Ras Tafari Nation, Howell never wore dreadlocks.