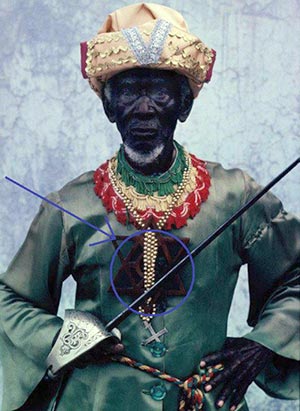 Ras Joseph Nathaniel Hibbert was born 1894 and died September 18, 1986. Along with Leonard Howell, Archibald Dunkley, and Robert Hinds, he was one of the first preachers of the Ras Tafari movement in Jamaica following the coronation of Ras Tafari as Emperor Haile Sellassie 1st of Ethiopia on 2 November 1930.

In about 1911, at the age of 17, he moved to Costa Rica where he spent 20 years at farm work, also becoming a member of the Ancient Order of Ethiopia masonic lodge. His background at this time had been with the Ethiopian Baptist Church that had been founded in Jamaica by the 18th century. Baptist preacher George Lisle. Hibbert returned to Jamaica in 1931, and started his ministry, the”Ethiopian Coptic Faith”. He began to teach that the newly crowned Emperor Haile Sellassie 1st was divine, in St. Andrew Parish, in a district called Benoah. He reached this conclusion independently, having studied the Ethiopic translation of the Bible. Soon afterwards, he transferred his ministry to Kingston, where he found that another street preacher named Leonard P. Howell was already teaching many similar doctrines.

Like Howell and Dunkley, Hibbert was subjected to arrest and imprisonment by authorities, and he was also a founding member of EWF Local 17.

Hibbert was probably among the Ras Tafari elders, including Mortimer Planno, who were given the honour of meeting with Emperor Haile Selassie I on his historic 1966 visit to Jamaica. In 1970, Hibbert formally invited the Archbishop Laike Mandefro, whom Emperor Haile Sellassie had sent to Jamaica as emissary of the Ethiopian Orthodox Tewahedo Church, to teach Rastafarians about the Orthodox Faith, and in about 1971, Mandefro named Hibbert as a “Spiritual Organizer”.