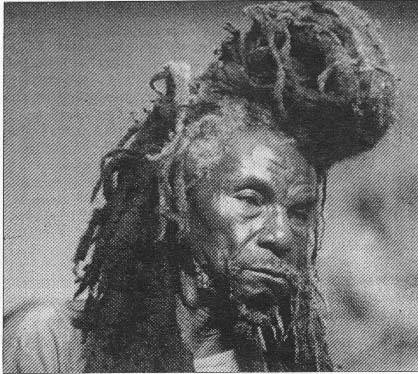 Born, George Watson, in the parish of St. Mary Jamaica W.I. on July 1st, 1925. Ras Boanerges’ aka Bongo Watto, similarly to many of the early Ras Tafari leaders was a street preacher. In fact he adopted the name Boanerges ‘(The sons of Thunder), from the Bible text Mark 3:17, … “And James the son of Zebedee, and John the brother of James; and he surnamed them Boanerges, which is ‘The sons of Thunder’.”

As a young man, Bongo Watto founded the Youth Black Faith in 1947, in his yard at 9th Street, Trench Town, Jamaica W.I.. His reason was that the elders in the Ras Tafari movement were marginalizing the youth. Ras Boanerges was instrumental in developing some of the tenets that became fundamental within the Nyahbingi Order.

Bongo Watto regarded himself as the founder of the Nyahbingi Order and often conducted Nyahbingi services in the tradition of his revival experiences that emulates shepherd leading the congregation as his flock. Many contemporary elders grew in the “faith” under his tutelage and owe much of the Ras Tafari upbringing to their time with him in “Jerusalem Schoolroom”. No Elder has had the impact on internationalizing Ras Tafari, that Bongo Watto and Prince Emmanuel had.

He fought against Reggae singers and players of instruments in ways similar to the church’s opposition of secular music and entertainment.  His sermon was unchanged until his latter years when he started to burn Jah because of the exclusion of the letter “J” within the Hebrew alphabet.

On many occasions Ras Boanerges was sent to jail for possession of marijuana his Sacred Herb plant. The experience of being twice poisoned made him peculiar in his eating habits. He became a very strict vegan (italist) who preferred to prepare his own meal and often ate mostly raw vegetables, fruits and juices.

Ras Boanerges made his transition onto the realm of ancestor in October the year 2000.