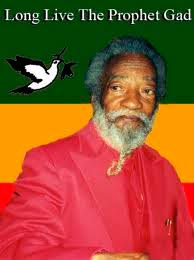 Prophet Gad was born as Vernon Carrington on November 1, 1936. Prophet Gad founded the Twelve Tribes of Israel branch of the RasTafari movement in 1968. He was also a member of The Ethiopian World Federation (EWF Inc.) that was founded by Emperor Haile Sellassie 1st of Ethiopia on August 25, 1937 in New York City. Dr. Vernon Carrington’s branch of the EWF Inc. (Local #15) later became The Twelve Tribes Of Israel. Members of the Twelve Tribes of Israel view Carrington as a prophet who began the repatriation of RasTafari to Africa, the homeland.  He modeled himself off two Gads in the Hebrew Bible. 1) The seventh son of Jacob.  2) A seer or prophet who was one of the personal prophets of King David of Israel and some of his writings are believed to be included in the Books of Samuel telling David to leave Moab and return to the land of Judah.

Prophet Gad’s transition to the realm of an ancestor took place on March 22, 2005.