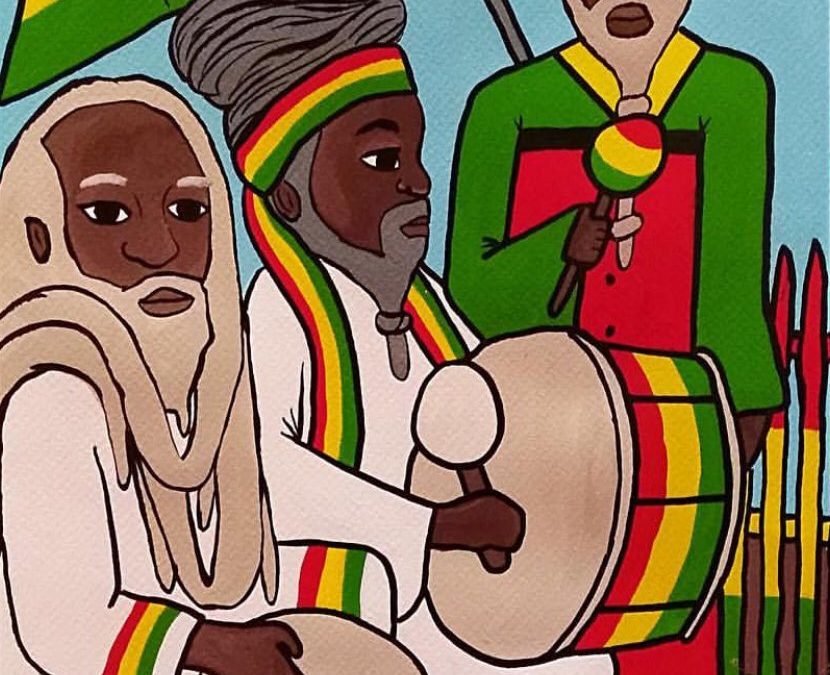 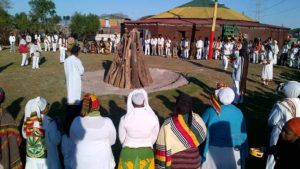 According to most including modern urban legend on the Ras Tafari Nation, which distorts real discourse and analysis, the word ‘Nyabinghi’ has a somewhat complicated history. It was originally associated with an uprising against White European colonialism in southwestern Uganda during the mid to late nineteenth century and the early part of the twentieth…

The movement was mainly led by a number of women, including a charismatic healer called Muhumusa, who was much feared. She was believed to be possessed by the spirit of a legendary Ithiopia Queen, Nyabinghi. Muhumusa not only inspired a vast popular following, but also organized military action against the German colonialists

The tenacity of this over-simplified explanation that mixes facts and lies needs to be pointed out. The first is that there was always in existence, an African Queen of Queens whose memory still lingers in so many stories and legends right across Africa, like the Queen Sheba, and the Empress Kandake.

As the story goes, the spirit of this African Empress, this dread lioness Queen of Queens, Avenger of her father and son, subsists in Africa and the diaspora until this day, manifesting her presence and actions in this physical domain through spiritual possession, inspiration and mental transformation.

There are various names for this historical African Queen of Queens but at a time she was known in the cradle of the Egyptian and Kushitic civilization, in the upper Nile areas, toward the borders of modern Southern Sudan, and Uganda, as Queen Nyabinghi.

The name Nyabinghi was a synonym for Sekhmet. Though the true details of her life has been subsumed in legends, Queen Nyabinghi was the archetypical Priestess-Queen of a province of Upper Kush (Ethiopia-Egypt), who rebelled against the oppressive life-denying evil regime which disrupted order and stability in the motherland through the instrumentality of foreign occupation, external manipulation and local collaboration.

Descent of the authentic lineage of the ancient Kushitic Kings of Kings, this dread locked little African princess fled from the corrupting influence of the evil forces of oppression into the inner reaches of the great forests.

Nyabinghi took refugee in forests spanning modern Congo, Sudan and Uganda. There in an act of daring and defiance she established a mass guerrilla army of dread rebels (known as the children of Nyabinghi or Binghis for short) that fought against the collusive cabal of pale forces oppressing the ancient motherland until oppression fled from the motherland.

Nyabinghi’s self -sacrificing and daring action took the foreign over-lords by surprise and aided by the spiritual power of Sekhmet, Nyabinghi and her warriors soon crushed the oppressive regime and chased it away from the land.

The natural ebullinece of Nyabinghi, her intelligence and her charisma soon made her an a focus of fanatical devotion for her followers. Her male and female dread lock devotees sought leadership and spiritual guidance from her insight. She left a code of living for her followers. This code was necessary in maintaining their natural connection with their maternal origin the earth. 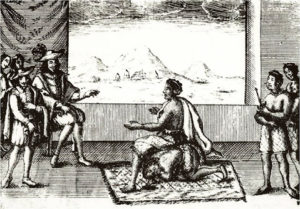 First and foremost, Nyabinghi is the true defender of the peace, justice and order in the motherland. To Nyabinghi, there is nothing more precious than the humble soil of Africa on which the Binghis are born, where they grow and into whose embrace they shall sleep continuously. Nyabinghi loves all humanity without compromise. Queen Nyabinghi adulates the works of her father, and her son. So should all the Binghis.

Binghis are the guardian of the land and the brothers and sisters to all that live right in creation. Love them, respect them and show them compassion always. Binghi deals only with righteousness. Righteous action, thoughts words and deeds. One who lives Nyabinghi does no wrong. Wrong weakens the strong. Binghis will always share water with the thirsty, food with the hungry, clothe with the naked and a boat for whomever would cross the river. Nyabinghi shows loyalty and sincerity to the just, but the unjust were to be cleansed with fire.

As postscripts, some versions of the story hold that Nyabinghi lost her life in the struggle; others say she lost her eye others talk about the loss of limbs or children. The point is that the struggle launched by Nyabinghi came at a great personal cost to her. But it brought untold and everlasting gains to the land of the Kushites. What a royal soul!

The selflessness, fortitude and steadfastness of Nyabinghi increased the commitment of her devotees. Even after she had physically departed earth, which in itself was controversial as, many believed that she had simply vanished rather than died, mediums, prophets and sages still reported of communication and contact with this ever-loving patroness of righteous Africa.

For millennia, her worship has persisted in Africa. Her mediums, devotees and followers, and prophets are easily identifiable by their dreadlocks and their lion and lioness totem and almost overbearing commitment to the welfare of Africa and Africans always pervaded the continent.

The early colonist and subsequent slavers from Europe unwittingly reported of a secretive but co-ordinated continent wide resistance against colonial depredations. There were reports of subversive and insurgent activities by certain faceless cults operating throughout Africa against colonial incursion.

Simultaneous accounts from Nigeria, Serria Leone, Gambia, Senegal, Sudan, Congo and Uganda detailed vigours resistance movements against the thrust of the European powers. Although armed with better weapons, the British soldiers were always in dread of encounters with one of those groups. They were courageous, fearless and formidable in action. In death they went with a royal dignity. It was as if they met their deaths willingly.

This resistance was alive also in the Maroon communities of the penal slave Islands of the Caribbean, and in South America. In the United States where the power of travesty was projected with pompous arrogance, resistance took the form of secret actions like random poisoning of the slave keepers, their animals and the destruction of their livelihood through arson and other acts of vandalism on the slave plantation.

In the land of the first Pharaohs, in Ithiopia/Northern Uganda near the borders with Sudan, the colonialist and slave masters encountered one of the incarnate forms of Sekhmet the dread lioness, by way of a resistance movement fighting their depredations on the African soil.

In the early 20th century one of the most feared Nyabingi leaders was Muhumusa a dreadlock guerrilla fighter with the Nyabinghi movement, a person described by the illegal and illegitimate colonial governments established by the European savages as ‘an extraordinary character’.

Her followers believed the spirit of the legendary Kushitic Queen, Nyabinghi, possessed her. Calling for a revival of right living through reliance on the principles of the forest code of the ancestral Nyabinghi, Muhumusa not only inspired a vast popular following of dreadlocked-lion (and lioness) worshipping, hemp smoking auxillary fighters, but also organised military action against the German colonialists.

The British subsequently condemned the Nyabinghi movement as ‘witchcraft’. and Muhumusa was captured in 1913. The government of the European savages relentlessly hounded the Ugandan movement.

British effort to destroy the Nyabinghi movement was implicated its criminalization as witchcraft through Witchcraft Ordinance of 1912, which promoted Christianity and encouraged other indigenous anti-Nyabinghi cults. The British used the witch burning procedure of 1500 to 1600 that were central in the transition from pre-capitalist to capitalist relations in Europe.

Even after the capure of Nyabinghi Muhumusa, the uprisings continued nevertheless, led by other women and occasionally men who had become similarly possessed by the power and presence of She who must be obeyed, the dreadlock lioness Goddess of Africa, the Queen of Queens and the Majestic Lady of Power, Sekhmet-Nyabinghi the daughter and mother of the great God.

Again, such brave resistance could not be so easily forgotten. It has lived on in many ways amongst the children of Africa at home and in the diaspora, having much influence on the Ras Tafari tradition, in which so-called Nyabinghi codes of livity, and chants are very popular and usually form the basis of the annual Groundation celebrations. In Jamaican parlance, the name Nyabinghi has come to mean ‘Death to Black and White oppressors’.

From the late 19th century to the 1920s in the Caribbean Islands and especially in Jamaica, once again…the chant of Nyabinghi was heard. She was there, her name, her presence, her forest code, her forest chants and drummings, her holy chalice the cannabis hemp, her totemic animals the lions and the lionesses, and her ever present dreadlocks followers, all were there too.

Again, one encounters Nyabinghi in the West Indies, chanting word, sound and power in Jamaica, in the United States, in Canada, Africa, rising, fighting against savage oppression, chanting death and destruction unto black and white oppressors wherever they may be!

These days one observes the binghis and the binghis’ children stepping forth to take the secpter, the royal staff of power, to restore stability all over world. Given her antecedents, Sekhmet-Nyabinghi and her Binghi children will win this one once again.

Occupation: queen of the Ndongo (Angola), queen of Matamba

Brother who became King and whom Nzinga succeeded: Mbandi 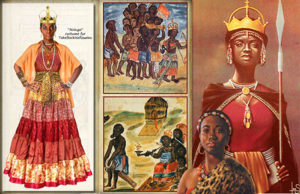 Anna Nzinga was born the same year that the Ndongo people, led by her father, began fighting against Portuguese who were raiding their territory for slaves and attempting to conquer territory they believed included silver mines.

When Anna Nzinga’s brother, Mbandi, deposed his father, he had Nzinga’s child murdered. She fled with her husband to Matamba. Mbandi’s rule was cruel, unpopular, and chaotic. In 1633 he asked Nzinga to return and negotiate a a treaty with the Portuguese.

Nzinga mustered a royal impression as she approached the negotiations. The Portuguese arranged the meeting room with only one chair, so Nzinga would have to stand, making her appear to be the inferior of the Portuguese governor. But she outsmarted the Europeans, and had her maid kneel, making a chair — and making quite an impression of power.

Nzinga succeeded in this negotiation with the Portuguese governor, Correa de Souza, restoring her brother to power, and the Portuguese agreed to limits on the slave trade. Around this time, Nzinga was baptized as a Christian, taking the name Dona Anna de Souza.

In 1623, Nzinga had her brother killed, and became ruler. The Portuguese named her governer of Luanda, and she opened her land to Christian missionaries and to the introduction of whatever modern technologies she could attract. By 1626, she had resumed the conflict with the Portuguese, pointing to their many treaty violations. The Portuguese established one of Nzinga’s relatives as a puppet king (Phillip) while Nzinga’s forces continued to harass the Portuguese. She found allies in some neighboring peoples, and in Dutch merchants, and conquered and became ruler of the Matamba (1630), continuing a resistance campaign against the Portuguese.

Nzinga died in 1663, at the age of 82, and was succeeded by her sister in Matamba. Her rule did not rule long. Angola did not become independent of Portuguese authority until 1974.