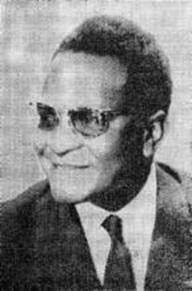 Mr. Hamani Diori, President of the Council of Ministers, Minister of Foreign Affairs and Prime Minister of the Republic of Niger, was born in 1916 at Soudoure in Western Niger.

A graduate of Ecole Normale in Dakar, he began his career as a teacher in Niamey, Maradi, and Paris. Among the variety of posts he had, it would be worth noting that he was a headmaster a of school, one of the founders of the Niger Progressive Party and deputy vice-president, and last but not least, a member of the French delegation to the European Parliamentary Assembly.

In 1958, when his country became self-governing, he became president of the provisional government and the following year, president of the council of ministers of the young Republic. Ever since he became president, he has traveled extensively throughout his country. He acquaints himself with the problems of the people, asks them of their desires and aspirations, trying to find common denominator to a solution.

He is just as much at home in the deserts of Niger, as he is in Niamey. Wherever he goes his people receive him enthusiastically. He is simple in his manners, and in the way he speaks to the people, stating clearly the policy of his government: National unity, higher living standards, and economic development.

As a form believer of the new Africa, he signed Conseil de l’Entente together with leaders of Ivory Coast, Upper Volta, and Dahomey.