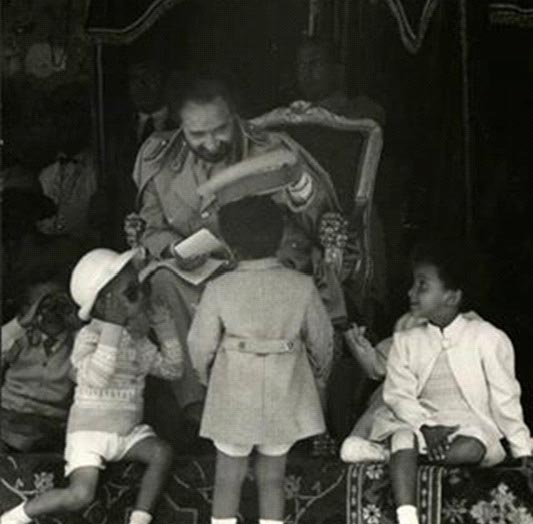 “A house built on granite and strong foundations, not even the onslaught of pouring rain, gushing torrents and strong winds will be able to pull down. Some people have written the story of my life representing as truth what in fact derives from ignorance, error or envy; but they cannot shake the truth from its place, even if they attempt to make others believe it.”

“When I spoke at Geneva in 1936, there was no precedent for a head of state addressing the League of Nations. I am neither the first, nor will I be the last head of state to address the United Nations, but only I have addressed both the League and this Organization in this capacity. The problems which confront us today are, equally, unprecedented. They have no counterparts in human experience. Men search the pages of history for solutions, for precedents, but there are none. This, then, is the ultimate challenge. Where are we to look for our survival, for the answers to the questions which have never before been posed? We must look, first, to Almighty God, Who has raised man above the animals and endowed him with intelligence and reason. We must put our faith in Him, that He will not desert us or permit us to destroy humanity which He created in His image. And we must look into ourselves, into the depth of our souls. We must become something we have never been and for which our education and experience and environment have ill-prepared us. We must become bigger than we have been: more courageous, greater in spirit, larger in outlook. We must become members of a new race, overcoming petty prejudice, owing our ultimate allegiance not to nations but to our fellow men within the human community.”

“We all know that the need for good leadership in every walk of life is much greater today than ever before. Every aspect of living demands guiding hands, business, the professions, fine arts, and the mechanical arts. And all of you young people who have been given the opportunity of an advanced education will in the future be called upon to shoulder, in varying degrees, the responsibilities to leading and serving the nation.

“It is important however to remember that leadership does not mean domination. The world is always well supplied with people who wish to rule and dominate others. The true leader is of a different sort. He seeks effective activity, which has a truly beneficent purpose. He inspires others to follow in his wake, and holding aloft the torch of wisdom leads the way for society to realize its genuinely great aspirations.

“You have learnt from your study of history that the story of nations is often told in terms of the accomplishment of individuals. In every significant event in history you will find a courageous and determined leader, an inspiring goal or objective, and an adversary who sought to spoil his efforts.

“In any normal society everyone has some opportunity to show himself as a leader, Even the mechanic or clerk who has an assistant assigned to him, not to speak of the doctor with all his helpers the officer who commands his troops, is a leader. Within his own sphere each has the same opportunity for showing ability and the same potential satisfactions, as has the leader of a Government. The leader is marked out by his individual craftsmanship, his sensibility and insight, his initiative and energy.

“Leaders are people who raise the standards by which they judge themselves, and by which they are willing to be judged. The goal chosen, the objective selected, the requirements imposed are not merely for their followers alone. They develop with consummate energy and devotion their own skill and knowledge in order to reach the standards they themselves have set. This wholehearted acceptance of the demands imposed by ever-higher standards is the basis of all human progress. A love of high quality we must remember is essential in a leader.

“Dependability is another requirement in a leader. To be dependable is to be willing to accept the responsibility and to carry it out faithfully. A leader will always be willing to take counsel from his people. But will have to often act on what his own mind tells him is right. This demands that the leader has trained himself out of any inordinate fear of making mistakes.

“To embark successfully in a career involving leadership demands a courageous and determined spirit. Once a person has decided upon his life’s work and is assured that in doing the work for which he is best endowed and equipped he is filling a vital need, what he then needs is faith and integrity, coupled with a courageous spirit so that no longer preferring himself to the fulfillment of his task he may address himself to the problems he must solve in order to be effective. “One mark of the great leader is that he feels sufficiently secure to devote his thought and attention to the well being of his subordinates and the perfection of his task, rather than being constantly worried about the approval of disapproval of others.

“He who would be a leader must pay the price in self-discipline and moral restraint. This entails the correction and improvement of personal character, the checking of passions and desires, and an exemplary control of one’s bodily needs and drives.

“Leaders have to submit themselves to a stricter self-discipline, and develop a more exemplary moral character than is expected of others. To be first in place one must be first in merit as well.

“It should not surprise us then to find that the greater number of acknowledged leaders have been people who trained themselves in the art of discipline and obedience. He who has not learned to render prompt and willing service to others will find it difficult to win and keep the goodwill and co-operation of his subordinates.

“Further a leader must possess initiative which is the creative ability to think in new ways and do new things. The leader has always to stay ahead. He cannot afford to set up a procedure and then fold his hands and linger lazily watching it work. He cannot be content merely to see new trends and take advantage of them. He must keep his imagination vividly alive so as to originate ideas and start trends.

“A word of warning is in order here. To help one’s subordinates or dependents at the cost of harm to the public is tantamount to sacrilege and blasphemy. It is unfortunate that many in positions of leadership both great and small have been found guilty of such practices.

“A good leader is devoted to his work and will willingly forego even the demands of sleep to see its accomplishment. This does not mean that he is impetuous. On the other hand, he maintains a balance between emotional drive and sound thinking.

“His labors, which sometimes appear excessive, derive from his firm realization that unless a man undertakes more than he can possibly do he will never be able to do all he can do. It is his enthusiasm that stimulates his energy.

No matter what our point of departure in speaking of leadership we reach the inescapable conclusion that the art of leadership consists in the ability to make people want to work for you when they are really under no obligation to do so.

The true leader is one who realizes by faith that he is an instrument in the hands of God and educates himself to be a guide and inspirer of the nobler sentiments and aspirations to the people. He will kindle interest, teach, aid, correct and inspire. Those whom he leads will co-operate with him in maintaining discipline for the good of the group. He will instruct his followers in the goals towards which to strive, and create in them a sense of mutual effort for attaining the goal.”