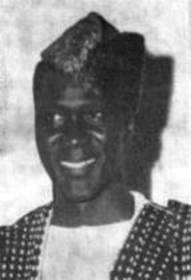 Sekou Toure, President of the Republic of Guinea, is a dynamic politician, who traces his ancestry from Emperor Almamy Samory Toure, the great national hero of the Guineans, who heroically fought against the French until 1898.

One of seven children of a farmer, he attended a school of Koranic studies at Kankan, eventually ended up in a French technical school. Even after he was forced to leave school, he had to run after his friends, who were still going to tell him what they had learned, and read everything he could lay his hands on. In the course of time, he became a French colonial treasury clerk in Guinea. When the treasury tried to muffle his union talks by sending him out of the country. He quit and became a full-time head of the Guinea branch of France’s “Confederation General du Travail.”

His stay in Paris, Warsaw, Prague, and in other cities of Europe, have left on him lasting impressions. As the founder of Guinea’s first labor union, and always a staunch supporter of trade unionism, he was the master mind behind the strikes of 1953, which brought to French African workers, their first major concessions.

President Sekou Toure is a man of varied experiences and is versatile minded. He was deputy in the French Assembly in Paris, a member of the Guinea Legislative Assembly and a mayor of the city of Conakry. When the French put through the Loi-Cadre in 1957, which kept control of each territory in the hands of a French Governor, but gave Africans the right to elect their own man as Vice-President the Executive Council, he became the number two man in his own country.

By refusing to accept the de Gaulle Referendum in 1958, he gave his country its complete detachment from the “French Community. It would he worthwhile quoting what he said in connection with this: “The idea of the French community would continue our status of indignity, and our status of subordination. We do not wish to settle our fate without France, or against France. We prefer poverty in liberty, to riches in slavery.”

The Guinea Ghana-Mali Union is part of the expression of president’s thought to the unity of Africa, which he expressed this way, “Nature has set a seal upon us, which we cannot disown, except at the risk of self-destruction, nor can we pit ourselves against each other, without compromising our common destiny.” His visits to the United States, the Soviet Union, the U. Kingdom, Canada, U.A.R., Czechoslovakia, Morocco, Ethiopia and other countries, have strengthened and consolidated his country’s relations with them. Observers who have heard him speak say; he could hold an audience spellbound for hours, whether speaking French, his own native tongue Malinke, or Soussou. As the idol of three million people, his name gives the man on the street, a sense of security freedom.

Besides making Guinea stronger than ever, he has introduced reaching reforms such as unity, the crashing of land-lords and bringing them under the control of the central government, the even distribution of land and wealth, all manifesting the sense of goodwill and care he has for the majority of his people. It is no wonder then, that he reins supreme as the darling of the average Guinean.

He still retains that vitality and dynamism of his young days. Having the youth, the drive and the ambition all on his side, we are confidant that he will make Guinea a more prosperous nation than ever, in the years to come.