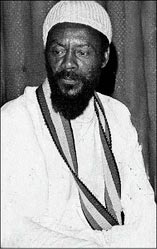 Highly popular and successful Jamaican drummer who played on some seminal early reggae records. Born Oswald Williams in the year1926,  in the parish of St. Thomas, Jamaica, Count Ossie was a drummer, percussionist, and vocalist. The foundations of reggae and its association with the Ras Tafari Nation, can be attributed to him.

Count Ossie  and The Mystic Revelation of Rastafari, combined African-influenced music with the European hymnal tradition to create a unique sound that inspired everyone from Ras Michael & the Sons of Negus and the Skatalites to Bob Marley & the Wailers and Toots & the Maytals.

Count Ossie’s earliest inspiration came from Rasta elder Brother Job, who introduced him to the philosophies of RasTafari. As a young boy Ossie grew up in a Rasta community where he learned techniques of vocal chanting and hand drumming under the tutelage of Brother Job a Nyabinghi drummer from the hills of Jamaica. In the early 1950s he set up a Rasta community in Rockfort on the east side of Kingston, where many of Kingston’s musicians learned about the RasTafari Nation.

Count Ossie cut his first singles, including “O’Carolina” regarded by some music historians as the first-ever ska record, and “Chubby”, for Prince Buster.  He also recorded for Harry Mudie. Beginning in 1959, Count Ossie recorded for Sir Coxsone Dodd at Studio One.

The two albums that he recorded were masterpiece.  The first one was Grounation three-LP set (1973), which includes songs such as “Oh Carolina”, “So Long”, and “Grounation”. Two years later he recorded Tales Of Mozambique (Dynamic 1975)

There has been some debate as to the cause of Count Ossie’s transition to the relm of ancestor at age 50, on October, 18, 1976. While some sources claim that he was in an auto accident, others say that he was trampled when a crowd panicked at the National Arena.