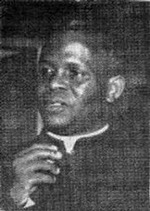 Mr. Fulbert Youlou, the stocky, jovial and friendly President of the Republic of the Congo, was born on June 1, 1917 at the town of Moumbouolo, to the west of Brazzaville. At the age of 12, he entered a seminary at Brazzaville. Proving himself a good and intelligent student, he was sent to the Cameroons to complete his theology and philosophy studies. The friends he met there, particularly Boganda, who later became the first Prime Minister of the Cameroon Federation, have left deep and lasting influences on him. History, theology, philosophy, and the future of Africa were among their favorite subjects of discussion. After completing their studies both promised each other to fight for the independence of their respective countries.

Fulbert Youlou came to his country and taught for some years. As a priest he met European clergymen engaged in missionary activities in the Congo. The fruitful discussions he has had with them, have also enabled him to form political convictions and principles of his own.

Though his bishop opposed his idea of standing for election, in 1955 he campaigned for a seat in the National Assembly and lost. But then, failure being a stepping stone to success, he never despaired, never lost heart and faith in his ability to attain his life-long ambition.

Soon he went to Paris for a variety of reasons, and this opportunity enabled him fill the gaps of his education. He returned home to the Congo, and with the help of friends organized the UDDIA party. The party won half of the seats in the National Assembly. Mr. Youlou first became the Mayor of the city of Brazzaville and then Minister of Agriculture. After that, it was not difficult for his towering personality to move on to the premiership and then to the Congolese Presidency.