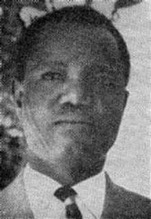 President Francois Tombalbaye, who serves his country as President, Prime Minister, and Minister of Defense and Justice, was born at Bedaya in 1918. The deep scars on his face bear his tribe’s distinguishing marks.

After the Second World War, he became a businessman. Then joining the Gabrielle Lisette’s Progressive Party, he turned out to be a politician.

For two years he represented Chad in the Grand Council of French Equatorial Africa. Besides this, he also served as Vice-President of the Grand-Council for a year. In 1959, he became the prime minister of the then Fourth Provisional Government of Chad. At the same time, he fully endorsed the plans of his party, seeing to it, that it appealed to the insistent demands of his country.