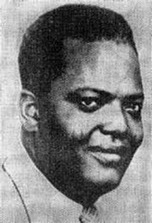 Mr. Hubert Maga, President of the Republic of Dahomey, was born at Parakou in 1910. He was educated up to secondary level in Dahomey and then became a teacher.  As the headmaster of a school, indeed as a teacher too, he was vigorously interested in youth problems and aspirations. Among other things, he was the first to organize scout troops in northern Dahomey.

President Maga’s political career began in 1947, when he was made a territorial councilor. At one time, he was elected and re-elected deputy for Dahomey to the French National Assembly. He was also the founder of the Democratic Dahomeian Movement.

Of the many posts in which he served, mention has to be made of his being Grand Councilor for Art for Dahomey, Minister of Labor and Social Affairs, France’s Secretary of State for Labor in the Gaillard Government, his election to the Legislative Assembly of the Republic of Dahomey, and last but not least, his membership to the Senate of the French Community in 1959.