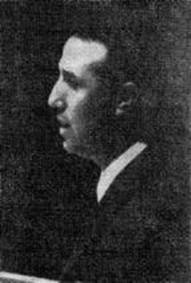 Mr. Ben Bella, the symbol of Algerian Independence, hope and pride, was born 46 years ago, in Marnia near the Moroccan border. He is a tall athletic man, well known in those turbulent years, not only as a soccer player, but also as the hot shot captain of a local football team.

After High school he underwent a pre-military training in the Chantrers de la Jeunesse in Algeria. As a master sergeant in the French army, he has a brilliant record, and a chest full of decorations, which he won in World War II.

All these years, his major concern was the status of his country-men. He thought of nothing else but Algeria’s freedom. After the war, he returned to Marinia and entered politics to become not only a municipal officer, but also a devoted member of the Movement for the Triumph of Democratic Liberties.

Mr. Ben Bella was one of the six initial leaders of the Nationalist Revolution, which years in advance, planned and engineered the November, 1954 revolution.

In 1949, he organized the daring hold-up of the post office in Oran. Mr. Ben Bella was captured by the French the following year, and given a life sentence of hard labor. He escaped from the Blida prison and lived underground in Europe and North Africa. During that time time, he visited President Nasser and President Habib Bourguiba. Both Presidents Nasser and Bourgiba gave him arms and support, which he found extremely indispensable for carrying out his plans.

In 1957, while carrying out a  mission, en route from Rabat to Tunis, the pilot of the plane received radio instructions from the French authorities to land in Algiers, which he did. Mr. Ben Bella was then imprisoned in the Island of Aix in the Atlantic Coast of France, and then in Chateaux.

Whether in the French army, or in the French prisons, be it for his country’s independence, or its future prosperity, Mr. Ben Bella clashed with France for many years. The French thought that the imprisonment of Mr. Ben Bella and his colleagues would solve the problem. On the contrary, it added fuel to the flames that burnt more passionately and brilliantly than ever.

On the part of Mr. Ben Bella, his imprisonment gave him the adequate time which he needed, for filling up the gaps of his education. He read works on economics, politics, history, and almost anything he could lay his hands on. He also learnt English, German, and literary Arabic. In Algeria he became a man of almost legendary prestige —- indeed a martyr on whom the enthusiasm of his people was pinned.

On September 26, 1962, he was made Algeria’s first Prime Minister by the Algerian National Assembly. He has said that he wants to convert Algeria into a socialist state. And ever since the time he took the reins of power, he is seen struggling to restore the economy of Algeria, which has been brought to the verge of disaster by seven and half years of war.