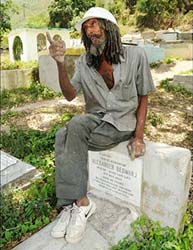 Between 1891 and 1921, Alexander Bedward, an African-Jamaican healer, led the Jamaica Baptist Free Church in August Town, Jamaica, on the Hope River. Born in 1848 or 1850 at the present Matilda’s Corner, then part of Hope Plantation in St. Andrew Parish, Bedward died on November 8, 1930. As a youth he raised provisions on Hope Plantation, and he was later employed on Louis Verley’s sugar property, Mona, in St. Andrew. Apart from a period spent as a laborer in Colon, Colombia (later Panama), from 1883 to 1885, he worked until 1891 at Mona. He and his wife Elizabeth also leased land in the estate village of August Town. Between 1882 and 1889, a series of frightening dreams and visions, considered signs of divine election by African-Jamaicans, convinced Bedward to abandon an immoral life. In 1889 H. E. Shakespeare Wood (1800–1901), a reputed African-American, inducted Bedward as an elder of the Native Baptist Church. In October 1891 Bedward resigned his Mona Estate job. In December, citing divine commands to conduct thrice-weekly fasts and weekly riverside healing services, he began the ministry that made him famous. Hope River holy water became the conduit for visits to the other world, for encounters with angels or the holy spirit, and for healing and rebirth through baptism by immersion. In addition, fasting and meditation induced trances that produced insight.

Such activities suggest an otherworldly preoccupation, but given his prophetic persona and self-description as one of the Book of Revelation ‘s “two witnesses,” Bedward could not help being dissatisfied. Low wages and land hunger compounded by natural catastrophes pushed many, like the younger Bedward himself, into the wider Caribbean as migrant laborers. Bedward assailed ministers and physicians as mercenaries for charging fees, and he prophesied the imminent end of the world. Jamaica’s privileged class feared Bedward’s heated sermons, and in 1895 the press and police framed him, accusing him of advocating insurrection. A white lawyer, Philip Stern (d. 1933) defended him. Bedward was acquitted by reason of insanity and committed to an asylum. Released on a technicality, he continued his ministry.

Bedward had approximately 125 congregations in Jamaica, Cuba, and Central America. Many members were poor, but others earned a good living as dray-cart operators or contractors, and one owned an ice-cream parlor. Bedwardites in August Town worked for neighboring plantations, farmed, and sold firewood, Hope River water, or home-processed foods. Bedward settled labor disputes when they arose.

By 1920, Bedward decided that his powers had failed. Another Jamaican, Marcus Garvey (1887–1940), had become prominent, and Bedward identified Garvey as Moses and himself merely as Moses’ spokesman, Aaron. Convinced that his earthly mission had ended, Bedward revealed that he would undertake a spiritual ascension into heaven on December 31, 1920. In a July 1921 interview, Bedward averred that his followers had misunderstood him. Expecting him to take them up to heaven, between 3,000 and 6,000 followers disposed of their belongings and gathered to join the event. When the ascension did not occur, Bedward announced that he had risen in spirit.

In April 1921 Bedward rebuffed an armed police attempt to evict him from his home, flouted a ban on marching, and led a procession “to show the people of Kingston how strong I was.” An armed force surrounded the procession and arrested Bedward and several hundred supporters. Released by the judge, Bedward was rearrested, declared insane, and again committed to the lunatic asylum, where he died in 1930. Under the leadership of George Burke (1873–1939), Bedward’s son-in-law, the sect declined.

As an Old Testament–style prophet and millenarian who believed in the approach of a more perfect thousand-year-old society, Bedward drew on African-Jamaican misfortune. However, he never advocated armed rebellion, as the colonial state’s treason case asserted and some unwary scholars have believed. On the contrary, Bedward later denied that he had ever incited people to rebel, and his actions belie the charge. He sought recognition of his pastors as marriage officers, solicited votes for Philip Stern in 1895, and he remained accessible to white visitors. In 1920 he predicted God’s punishment of both white and black “rascals” on the Last Day.

The consolation and release that Bedwardites found in prophetic biblical texts with visions of millennial bliss diluted any potential for political insurrection even if Bedward had wished it. The ascension fiasco, which impoverished his followers and made them laughing stocks, may have persuaded some to trust other doctrines. Roman Henry, Bedward’s private secretary and a Garveyite, broke with Burke. In the 1930s, Bedwardites and Garveyites Robert Hinds (d. 1950) and Leonard Howell (1898–1981) transformed Bedward’s millenarianism into the more antiestablishment and durable Rastafarian movement, which recognized Ras Tafari (Emperor Haile Selassie, r. 1930–1974) of Ethiopia as a politico-religious redeemer.